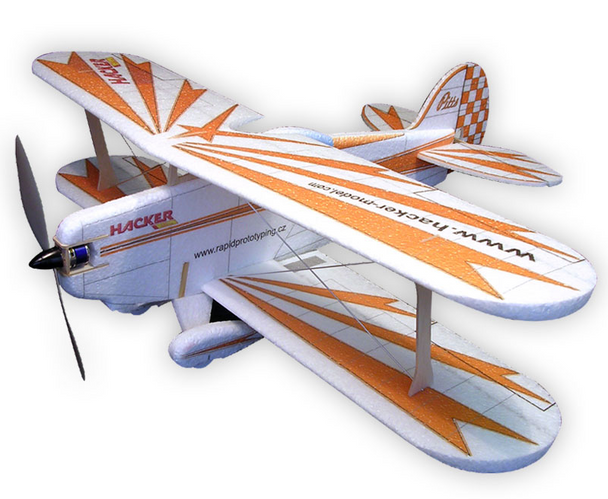 Hacker Models Pitt's S1 EPP model is one of the most classic designs that hasn't aged one bit.  With air foiled wings, and high detailed printing this model surely stands out from any other EPP model.   Great sport/3d flight can easily be achieved with the basic electronics which Twisted Hobbys can supplied in our power system combos.  Build in an evening and enjoy your new Pitts S1 EPP model

MSRP:
Now: $21.99
Was:
Finally an accurate way to set center of gravity on your favorite Twisted Hobbys EPP Foamie.  CG machine comes unassemblied with protective tape which can be removed before assembly.  ...

MSRP:
Now: $5.50
Was:
Finally an accurate way to see if your building our favorite Twisted Hobbys EPP Foamie square and true.  Measures 3" on each side, comes with protective tape over square.

MSRP:
Now: $11.99
Was:
Simply a must have item for your foamies!  One of the biggest power loss issues is an out of balanced prop! High Sensitivity Propeller Balancer, will work with all of our props in house. ...

MSRP:
Now: $4.99
Was:
Must have hobby knife set for building, repairing or any of your other modeling needs.   Ideal for cutting foam, plastic, wood, wires or even glue!  Includes multiple different shape blades...

MSRP:
Now: $9.99
Was:
Storing your airplane safely has never been easier. The Twisted Hooker Mounting kit, designed for most all small profile and larger airplane models.  Made in the USA. Are you running out of room...

MSRP:
Now: $2.85
Was:
GemFan produces excellent propellers for airplane as well as other aircraft uses, and they are available in a variety of colors and materials. They are all well balanced from the factory and provide...

MSRP: $154.99
Now: $124.99
Was:
BUNDLE AND SAVE!  Twisted Hobbys series power combos offers the perfect balance of performance, quality products at affordable prices.  Our matched components are