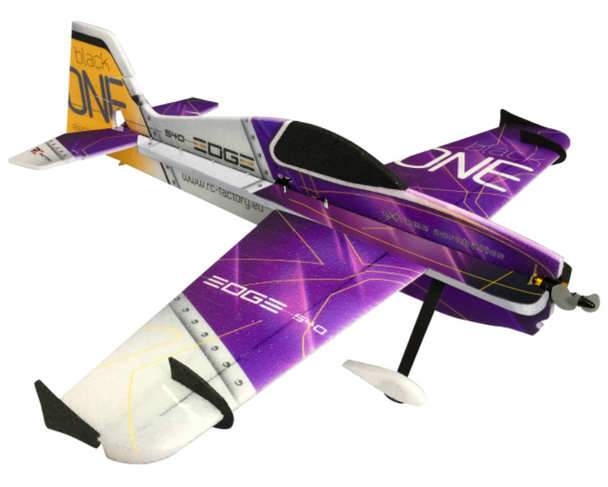 The Edge 540 V3 is Rc Factory's newest 1m model V3 series with increased stiffness and torsion rigidity. We have beefed up everything, but especially the torsion rigidity of the fuselage - so that fuselage twist in fast rolling maneuvers is now totally a thing of the past. The wing is thicker too, for better tolerance of the most insane, high-G stunts.   Those that are familiar with the previous 39” models will appreciate the new hardware and construction including rear tail control push rod assemblies with adjustable end links and new epp bracing for easy assembly.
While creating a new ground up air-frame the duel aileron servos have now been re-located which creates a plush/clean look.   The over all flight envelope has increased greatly giving a sense of unreal control authority and increased roll rate was also achieved with the addition of outer counter balance tabs. This model was designed for the pilot wanting to learn the “next step” and also those who choose a balsa 3d model alternative.  * Spinner not included *
Model Spec's:
Wing Span = 39"
AUW: 400-500g (depending on components used)
Recommended Power System:
Power System Components: Other Requirements: Build Resources & Replacement Parts Links:
View AllClose

MSRP:
Now: $11.99
Was:
Simply a must have item for your foamies!  One of the biggest power loss issues is an out of balanced prop! High Sensitivity Propeller Balancer, will work with all of our props in house. ...

MSRP:
Now: $6.99
Was:
CEC-CORP C-Bond Thin is a low viscosity general purpose instant/cyanoacrylate glue. This glue comes with an anti-clog cap and has a 5-10 second cure time. C-BOND Thin has good penetration for...

MSRP:
Now: $7.19
Was:
C-Set is a Super Glue Accelerator, also known as a glue “activator”. It is used to speed up the drying time of cyanoacrylate super glues. The accelerator is a solvent-based product that can be...